The character you are interested in may not be available for your country.

Lampoon, humor and adventure in the secret agents world. Because of its unusual line and its presence in the publishing market from almost thirty years on, this comic have to be considered a reference point in the Italian comics field.
More than 520 issues available on a monthly basis.

big format series completely independent from the Alan Ford original one.
The stories are of two kind: vacation time stories and great classics of literature adaptated in the crazy, humoristic world of Alan Ford’s character.
More than 20 issues, 120 pages per issue, 2 panels per page.

Young, rich, beautiful, very fond with his job, this is Beverly Kerr successful psychoanalyst. She is fiance’ with the vice-district attorney of New York City Robert Forrest, and her father is a rich financing businessman. Beverly lives in a Rich mood, surrounded of V.I.P touching, day by day, a real live with his job she finds very exciting.
She is soon involved with her clients problems and she loves to do it. She is not particularly attracted by the marriage and this is making full of jealousy his man. Beverly met the detective Kerry Kross during an electoral party and the women became very friendly each other.
9 issues for about 800 pages.

The first comics realization, in perfect historical adherence, of the beginning of the French Revolution (1788-1789), all plates are accompained with written notes by the author.
The book has been qualified as good school-text.
120 pages with 6 panels is alla complete work.
Realized in 15 episodes of 8 pages each.

Pioneer of the adult comics, Kriminal is one of the first negative hero in the Italain comics. Wearing a skeleton costume, he steals and kills, ever hunted by Patrick Milton, chief inspector of Scotland Yard. Adventures with crime, mistery and thrilling. Suggested for mature readers.
More than 400 issues available.
120 pages per issue, 2 panels per page.

Adventure and Action in the far-west world. Maschera Nera is a Zorro type hero, hiding under his mask the identity of Ringo Rowandt, a young European educated lawyer. Classic far-west adventures with action and a touch of humor.
More than 69 issues available.

Once upon a time, in the Middle Age, a king named Maxmagnus and his fiduciary administrator spoiled poor people that were so unlucky to live in his kingdom. Humor and a sharp timeless political satire.
64 pages divided in 29 episodes are the complete work. Each episode is a complete story.
Printed pages size: cm.16,5×21,8.

Kimberly Davidson, shorted Kim, joined very young the U.S. Marine Corps during the Vietnam war where he was disgusted by the horror of the war. Back home he felt the God’s calling and became a catholic priest in new York City leaving his fiance’ Jennifer that Was waiting for his return to get married. Father Kimberly loves his neighbor and his strong wish is to help all people who suffer but it is not easy even being lovely.
One day a killer shot by police, a few minute before dying ask for a confession. The bandit is suspected to have stolen a very big sum to the Italian Mafia but even Russian Mafia is interested to pick up the money. Greedy will not win. Father Kimberly seems to enjoy his wok but a terrible dark lady named Ursilia is appearing in his life, unfortunately for him.

The well known all over the world masterpiece by Collodi, the famous wooden puppet Pinocchio, is here realized in a fantastic scenography put in a future world, not impossible, with robots, amazing machines and strange people.
This is a particular edition suggested for mature readers.
100 pages with 6 panels per page, divided in 10 episodes of 10 pages each.

A sophisticated work based on one of the most controversial character of the French Revolution: Maximilien de Robespierre.
His rise and fall are narrated in perfect historical adherence.
80 pages in full color realized in 8 episodes of 10 pages each.

This series tells the story of a ugly biologist, Marnie Bannister, who discovers the potion for eternal youth. She becomes young and beautiful and faces the road of success with a criminal attitude.
Thrilling, horror and mystery.
More than 300 issues available. 120 pages per issue, 2 panels per page.

This series of sixteen novels tells the adventures of Riccardo Finzi, a smalltown young and naive man that goes to the big city of Milano where starts working as a private detective. Thrilling with a touch of humor.
A successful movie has been taken from the first book of the series.
Complete series: 16 books.

All names, characters and logos appearing in these web pages are under protection of the international copyright laws
and trade-mark registrations. All rights reserved by Max Bunker.
Copyright (c) 2013 by Max Bunker 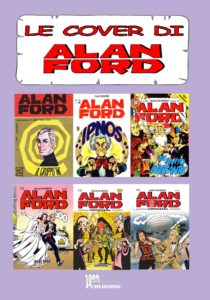 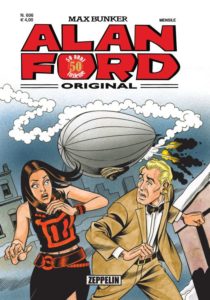 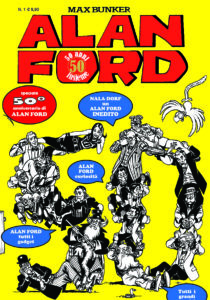 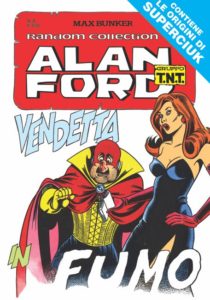 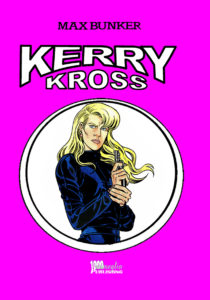 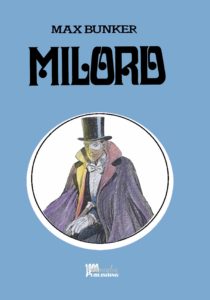